What are Words? What is Language?
Look at the image below and quickly answer the  following questions:
What is this? What does it mean? 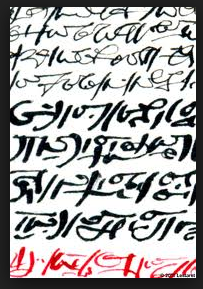 Is it a letter? A document from the Middle Ages? Do you think it comes from a particular part of the world?


Even if you cannot 'read' this perhaps the gestures on the page suggest feelings or attitudes?

Does it become more 'urgent' as the script becomes bolder and then changes colour?

Actually this is an example of 'asemic writing' which resembles calligraphy but in fact has no clear meaning. It is a work of art ....
The fact that most of us would assume that the image represents some sort of writing (even if we simply thought it was scribble) shows that the image looks like something that we have seen before - we make judgements about what it is and what it means based on these other things.

Download File
Language surrounds us every day and we know how to recognize it. Culture is the way we structure and live our lives. Because we know a lot about language and culture we automatically can talk about the image or 'make sense' of Lewis Carol's Jabberwocky.

What is language?
Language then, is a system of vocal signs through which humans communicate.....We can say that language is a system because it consists of patterns, or rules, for putting together elements such as sounds to make words and words to make sentences. If we don't follow these rules then meaning is lost.


There are many elements in this very complicated system called language: sounds are combined according to rules to create words, words are put into relationship with each other (more rules) in order to form sentences.
If we follow these rules we can meaningfully communicate!
BUT
it's important to note that these rules do not limit us to a finite set of utterances. Language is open ended and creative. We can make up new words (neologisms) in English and we can still follow the rules of grammar to combine words in a multitude of ways and make up new sentences.

Language functions through a system of contrasts. The contrasting elements come in pairs called Duality of Patterning.
Duality of Patterning - this is language's ability to create distinctions between sounds, words and units of meaning through a system of differences between two elements.
Consonant sounds contrast with vowel sounds, adding 's' to a word often makes it plural, while no 's' makes a word singular.
Phonemes (individual sound units) can be combined in various ways because we can distinguish the difference between them. Some sounds may be similar but it is difference that makes communication possible.
Morphemes (smallest meaningful unit in language) can also be combined in different ways


Grammar
Prescriptive Grammar - the set of rules we make up about how to speak and write 'properly.


Descriptive Grammar - the set of rules that linguists find when studying how meaning is created by language.