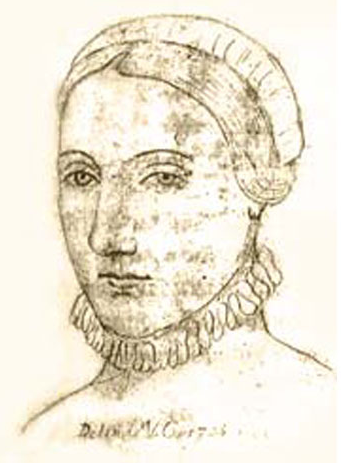 Anne Hathaway (1556-1623) was famous for being the wife of William Shakespeare. We know little about her but we do know that she was nine years older than her husband. When they married, she was 26 and he was 18 and she was already pregnant. They married in 1582 and had three children together. Susanna, who was born just six months after their wedding, and Judith and Hamnet, a set of twins. Sadly, Hamnet died in 1596 at just eleven years old. In 1601, Shakespeare went on to write the great tragedy Hamlet. Lots of scholars have kept themselves busy trying to draw out the connections between the play and the death of Shakespeare's son; the similarity of their names is too obvious to ignore. Although Shakespeare spent many years working in London, he made frequent visits to their home in Stratford-upon-Avon. Anne  outlived Shakespeare by seven years.

In the poem Anne sees her relationship with Shakespeare in terms of his own writing. She uses the sonnet form (though she does not follow all the conventions of rhyme or metre) which Shakespeare favoured. She suggests that as lovers they were as inventive as Shakespeare was in his dramatic poetry - and their bed might contain “forests, castles, torchlight”, “clifftops” and “seas where he would dive for pearls”. These images are very obviously erotic, and Ms. Duffy no doubt expects the reader to interpret them in a sexual sense. Where Shakespeare's words were” shooting stars” (blazing in glory across the sky) for her there was the more down-to-earth consequence of “kisses/on these lips”.

The poem relies on double meanings very like those we find in Shakespeare's own work. It gives a voice to someone of whom history has recorded little. The language is strictly too modern to be spoken by the historical Anne Hathaway (especially the word order and the meanings) but the lexicon (vocabulary) is not obviously anachronistic - that is, most of the words here could have been spoken by the real Anne Hathaway, though not quite with these meanings and probably not in this order.

Sonnet -
It follows the most basic sonnet rule: it has fourteen lines. But that's pretty much it – otherwise, it breaks a lot of rules. For example, it has no formal rhyme scheme and its meter is only roughly iambic pentameter.

Compare this to a line from Duffy's poem:

Duffy definitely takes a lot more liberty with the form than Shakespeare does. But her poem does include what is perhaps the signature Shakespearean sonnet feature: the couplet. Duffy's sonnet, like all of Shakespeare's, ends with a strong couplet (a pair of rhyming lines).

Who is the speaker, can she or he read minds, and, more importantly, can we trust her or him?
Anne Hathaway was Shakespeare's wife. Although we don't know too much about her, we do know what Shakespeare left for her in his will: their second best bed. While a lot of Shakespeare scholars assume that this was a sign that Shakespeare didn't love her, Duffy interprets the will differently in the poem. The second best bed in "Anne Hathaway" is a symbol of love and devotion.

We may never get to know the real Anne Hathaway, but we get to know a fictionalized version of her through Duffy's work. She's a talented writer herself, and she appropriates (or borrows) a lot of Shakespearean stuff for her own sonnet. She's also a very sensuous woman, and recounts her passionate experiences with her husband in great detail. And like Shakespeare, Anne loves metaphors. (Can you tell?) For example, she describes her husband's words as kisses that fall to earth like shooting stars. Now that's poetry!

Anne is not at all angry about Shakespeare's will, but she certainly does want others to understand their relationship. This poem is a rebuttal to all those people who think that Shakespeare didn't love his wife, and it's straight from the horse's mouth. Duffy's Anne is basically saying to them: he loved me, I loved him, we had awesome sex, and I'll always cherish our second best bed. So mind your own business and don't go nosing around in other people's wills.

The poem "Anne Hathaway" is spoken by, that's right, Anne Hathaway. Using the speaker's name as the title lets us know right away that Carol Ann Duffy, the poet, is not the one speaking. Instead, she's imagining the poem as spoken by a fictionalized version of a real historical figure (that means Anne Hathaway was a real lady, but Duffy is clearly giving her a particular personality here.)

"Anne Hathaway" comes from a collection of Duffy's poems titled The World's Wife. In this collection, Duffy imagines the voices of many women (both real and imagined) who didn't have the opportunity to speak for themselves, or who were overshadowed by their husbands. She writes, for example, about Mrs. Darwin, Mrs. Freud, and Odysseus's wife, Penelope. Anne Hathaway is just one of the many women who get the final say through Duffy's poetry.SettingWhile the setting of "Anne Hathaway" is not specified, we like to imagine that Anne is actually speaking to us from that second best bed that we've heard so much about. The bed is probably in Stratford-upon-Avon, a town in the south of England where Anne and Shakespeare lived (though Shakespeare spent much of his time in London).

When you read the poem, imagine Anne reading her poem aloud to you in a dark room on this small but momentous bed, almost as if the existence of the bed is proof enough of Shakespeare's love for her. We bet that this is what Duffy is going for in "Anne Hathaway."

The poem begins with an epigraph from Shakespeare's will. It says that the only item that he bequeaths (gives) to his wife, Anne, is their second best bed. While a lot of Shakespeare scholars have interpreted this to mean that Shakespeare didn't love his wife, Duffy totally turns the tables in her poem. Through the voice of Anne, she imagines that this second best bed is a sentimental reminder of the Shakespeares' passionate relationship. The bed, which many scholars interpret as a low blow, becomes a pretty moving symbol of love.


WritingThis poem is as much about writing as it is about love. Duffy uses a constant stream of writing metaphors to characterize Anne's relationship with Shakespeare. This is no surprise: Shakespeare was a writer after all. Still, though Bill may have been a writer, Anne Hathaway probably wasn't. In the poem, Anne appropriates (or borrows) Shakespeare's mode of communication for her own purposes by using the sonnet, a form popularized by Shakespeare through his 154-poem sonnet sequence. So in Duffy's poem, Shakespeare isn't the only writer in the family.

A quiet sonnet. There are a lot of s sounds (in words like kisses, stars, and softer), and we can almost picture Anne whispering across a dark and quiet room the two lovers whispering sweet nothings to each other in bed.

While the poem has a lot of repeated sounds, it doesn't properly rhyme until the final couplet (two line pair) that ends the poem. After a lot of almost-rhymes throughout the poem, Anne rhymes her end-words perfectly: head and bed. You can't help but say these lines louder. There's something incredibly satisfying about this final, strong, rhyme. Even though it's a pretty quiet poem up until this point, these lines beg to be enunciated clearly and perfectly, simply because of the rhyme.

Carol Ann Duffy is one of those writers who's a little obsessed with the fact that she's a writer. She just loves writing about writing (and sometimes even writing about writing about writing). Writing is one of her favorite metaphors for love (and for sex) and it appears across a number of her poems. Of course, Carol Ann Duffy didn't invent writing about writing. In fact, this motif is all over Shakespeare's sonnets, where he often comments that he will immortalize his beloved through his poetry. If you write it down, it's forever. In "Anne Hathaway," Duffy immortalizes Anne in the same way. She gives the fictionalized Anne a chance to speak for herself. And when she has this chance, what does she write about? Writing and love. It seems that Duffy's Anne and Shakespeare made a good pair after all.
Questions?

'Item I gyve unto my wife my second best bed...'
(from Shakespeare's will)