HALCYON DAZE...
1.Writing the Novel
Make a note of the ideas and interests which McEwan suggests form the core of the novel. How did the novel evolve and what ideas did he wish to explore in the novel?
2. Narrative Structure in the Opening
Talk about McEwan's description of the novel's opening as a building. What insight do his decisions give you into the structure of the novel as a whole? Think about the opening chapter and talk about McEwan's suggestion that it is important to get the visual aspect of the novel right.
3. Establishing the character of Joe
Make notes on McEwan's description of Joe
4. The balloon dilemma
In your own words explain what you now understand about evolutionary psychology. What role does McEwan see the balloon accident as playing in the novel? What insight does this contextual information give you into the novel (the storyline, the characters, relationships and so on)?
5. Playing with genre
List the reasons McEwan gives for using different genres in the novel. Skim through the novel and identify sections which you think are typical of the different genres he talks about.
6. Point of view and narrative voice
Make a note of McEwan's reasons for writing Enduring Love in the first person. In what ways does he suggest that Joe is an unreliable narrator?
7. Ideas and Patterns - themes and the writer
Talk about what you think McEwan means when he says that 'as a novelist you are entering into a game...trying to think of the reader as a character in the novel.'
What themes and patterers did you begin to notice on your first read?
8. Love
What role does McEwan suggest love plays in the novel?
What insight does this give you into the title?
9. Emotional versus Rational
How does McEwan set up the oppostiion between the emotional and the rational?
How is this opposition explored and challenged in the novel?
10. Science
What was McEwan attempting to do in writing about science in the form of a novel?
Make a note of your ideas about the role science plays in the novel
11. The endings
Note your responses to the three endings of  the novel.
According to McEwan what is the purpose of each of these endings?
12. The modern novel
What does McEwan think characterizes the modern novel? How far do you think these features are exemplified by Enduring Love? 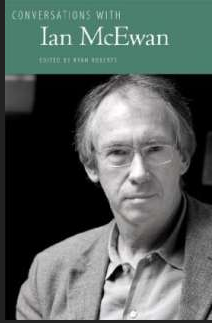 The early fiction of Ian McEwan had a gruesome originality: experimental studies about molestation and incest, stories of moral dislocation about child murder, lonely sadists, paedophiles and castration. His work appeared to have no moral centre; his disturbed protagonists operated in extreme isolation, in a realm beyond good and evil, where anything was permissible, and where there was never any benign restoration of order. (If his stories were filmed, away from the censor’s eye, they would be snuff movies). It was as if McEwan had peered through the smeared windows of 25 Cromwell Street, in Gloucester, and glimpsed the fetid landscape through which Fred West and his unhappy family moved. And then artfully reconstructed their lives – from within.

All this left a mark. McEwan was quickly demonised as ‘Ian Macabre’; the TLS complained that he wrote to shock, while some critics wondered what childhood trauma underpinned his obsessive imagination. As the critic John Lanchester remarked: ‘Ian McEwan has left-wing convictions and a right-wing imagination; the things he feels he ought to think, and the images that well up when he sits down to write, are at war.’

That McEwan, pale and unsmiling, with wiry, receding hair, tended to be photographed in half-shadow did little to alter the impression of someone grappling with an unspeakable psychological trauma. ‘People read my work and expected me to be extravagant and weird in person, so they wrote about my steely gaze or my perceived humourlessness,’ he told me.

Ian McEwan’s fiction thrives on dichotomies and dilemmas: the clash between science and unreason, between rationalism and belief, between the public and the private. He creates dramas out of accidental occurrences: the traumatic disappearance of a young child from a supermarket, which prefigured the James Bulger case The Child in Time(1987); a ballooning accident in the Oxfordshire countryside Enduring Love (1997); the unpremeditated murder of a jealous husband The Innocent, (1990); the abrupt appearance of menacing hounds on a Swiss mountainside Black Dogs (1992).

There is little in the modern world that does not interest him, from science to politics to pornography to musicology. Yet the demands of writing about the way we live today is intensely difficult, perhaps because we are so conscious of the world around us changing. No sooner have we attempted to frame a representation of our experience, than the picture has altered; our verbal portrait, squeezed through the mechanical grind of the publishing process, already appears dated. But McEwan, almost alone among modern British writers, dissects contemporary morality with the ruthlessness of a child pulling wings off a butterfly. He is not in flight from the modern world; indeed he embraces it with a slightly crazed, skewed ardour.

To McEwan life is a kind of disaster area, where random events always destabilise even the most ordered lives. Amsterdam, his sly and readable Booker-winning novella, is a cautionary parable of the ethics of modern newspaper journalism. The central event concerns the violation of a senior politician’s private life. The drama pivots on the discovery of photographs of the foreign secretary, a rancid right-winger, dressed up as a woman.

The editor of The Judge – a harassed, well-connected paranoid called Vernon Halliday – buys the photographs of the foreign secretary, an old friend whom he despises. Publication of the photographs, he reasons, will have a dual effect: increase circulation of his newspaper and ruin the foreign secretary. His actions are denounced by another friend, a composer called Clive Linley, who himself is morally compromised when he witnesses the attack of a woman in the Lake District, but fails to intervene. So we have the dual ethical dilemma – one echoing and informing the other – on which McEwan’s fictions usually turn.

When I interviewed McEwan he spoke candidly of his solitary childhood, of his mild teenage depression, his feelings of isolation. To meet McEwan is to meet, on first impression, a lifelong member of the professional upper-middle classes, a smooth-talking member of the Oxbridge elite. It is a false impression: his social journey is much more complex. The son of a jobbing Scottish soldier, he grew up in Singapore and north Africa, returning to England as a ‘very repressed, intense and intensely shy, cripplingly self-conscious’ adolescent, to attend a state-run military boarding school near Ipswich. (He later returned to East Anglia, as a more confident young man, when he was the first postgraduate student on Malcolm Bradbury’s pioneering creative writing MA course). At school, he felt isolated and vulnerable. His parents were 2000 miles away and he loathed the ‘orthodox cruelty’ and tiresome practical jokes of dormitory life. ‘There was no privacy, nowhere you could escape to.’

He went to Sussex University and was caught up in the counterculture; he later followed the hippie trail to North Africa, from where he returned to work with Malcolm Bradbury at UEA. Arriving in Norwich in the mid-1970s, he was preoccupied by the romance of being a writer. ‘I arrived in this rather lovely foreign town, took a room and had a meeting every three of four weeks with Malcolm. He offered no strictures and showed no shock at the content of my stories. He was remarkably tolerant. It was a fantastic piece of luck; having a reader with no egomaniacal wish to shape me to some preconceived end meant that I was free to find my own voice.’ In Norwich he wrote most of his two collections of stories, First Love, Last Rites and In Between the Sheets.

That was more than 20 years ago. The McEwan I met had been mellowed and calmed by wealth, fatherhood and hardened achievement. The spectacles remained, but the jeans and frayed T-shirts of his bedsit days were replaced by a fashionably creased linen suit and designer button-collared shirt. There was a jauntiness and swagger in his stride; why, he even had a tan.

Enduring Love, written against the template of a thriller, is his most successful novel, at least commercially. It certainly has the most exciting first chapter of recent English fiction. A huge hot air balloon lands in a field in the Oxfordshire countryside. From different points in the field, five men begin to run towards the balloon, alarmed because a boy is alone in the passenger basket. The balloon begins to rise, carried by the wind, and the men each grab a dangling rope. If they act collectively they may just prevent the balloon’s languorous rise (this is a vivid reconstruction of the battle between altruism and selfishness, the game theory which has enthralled evolutionary biologists and economists). But someone breaks rank; others follow, until only one man is left clinging to a rope. He is carried high up into the air and then drops to his death. ‘We watched him drop,’ writes McEwan. ‘You could see the acceleration. No forgiveness, no special dispensation for flesh, or bravery or kindness. Only ruthless gravity... I’ve never seen such a terrible thing as that falling man.’

The ballooning accident, echoing the drama of the disappearance of the child from a supermarket at the start of The Child in Time, is the welcome mat which McEwan lays out to his readers at the opening of all his novels. But this book is caged, like much of his later work, in an over-determined, schematic structure. At the scene of the ballooning accident, Joe Rose, the narrator, who is a science journalist, encounters Jed Parry, who conveniently happens to be a religious fanatic and a disturbed homosexual. The irrational Parry becomes obsessed with and stalks the rationalist Rose, whom Parry believes is sending him covert signals of love. So once again we have the binary opposition between scientism and belief, between reason and unreason with which we are already familiar from, say, Black Dogs, where the conflict between secularism and pseudo-religion is played out in the faltering marriage of June and Bernard Tremaine.

That McEwan won the 30th Booker Prize, in 1998, for a work as slight as Amsterdam, was a surprise. And yet who would begrudge him such an accolade after the way, as a young writer, harnessing his unease, he marked out new aesthetic territory, found a new way of writing about the modern world, and now, in middle age, continues to reveal a disconcerting stamina for exploring extreme psychological conditions.